So we have gotten some emails saying that we have not talked about a few things that everyone would like to know.

We have talked about it being hot, but truly it is VERY hot!  The lows are around 76 degrees at about 3:00 in the morning and a cool day would be a high of 92 degrees. And it feels really nice! Limited hot water is available for us to bathe in but we take cold showers so that we will be cool before we go to bed.  We try to be in bed for about an hour before the generator and our fan goes off so maybe we will not notice the heat as much. It has worked fairly well because we have been sleeping pretty well.

We realized today that we have not had any meat since we came to Africa. Our daily food is porridge or oatmeal in the morning, rice and beans and possibly some kind of vegetable mix for lunch and dinner.  They try to mix it up every day but rice and beans are always there. 🙂 Surprisingly, Josh usually does not each the veggie mix unless it is cold.  But he doesn’t mind the plain rice and beans so it has been fine. I usually have some of the greens because they add more flavor to the dish.

We also wanted to tell you a little about the local people.  The people group that this orphanage works with is the Mundari people.  They are distinguished by the V-shaped markings on their heads. The markings are being discouraged now by the government of South Sudan because it is unsanitary and because it separates them into tribes and the tribes will fight but they are trying to unite everyone under “South Sudan” instead of tribes. There is 1 child here at the compound that has Mundari markings. Below is his picture. His name is Phillip and he is becoming a friend of ours. 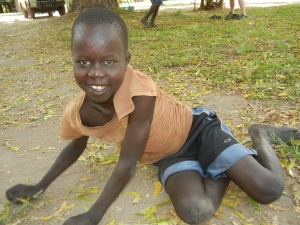 Please continue to pray as we go through the next three weeks.  We believe God has brought us here for a purpose and we hope that we will fulfill it.

Thank you for your prayers and support.

Posted by mtnmovers on October 23, 2012 in gail, Josh, Uncategorized

One response to “Details”